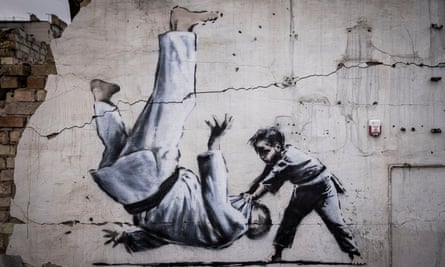 Banksy appears to have confirmed he is in Ukraine after revealing his latest artwork on Instagram.

Speculation had been mounting that the anonymous graffiti artist was in the war-torn country after a series of murals appeared in the town of Borodianka, near Kyiv.

One mural depicted a man resembling the Russian president, Vladimir Putin, being thrown to the floor during a judo match with a young boy.

Another showed two children using a metal tank trap as a seesaw.

However, the mural that Banksy used to reveal