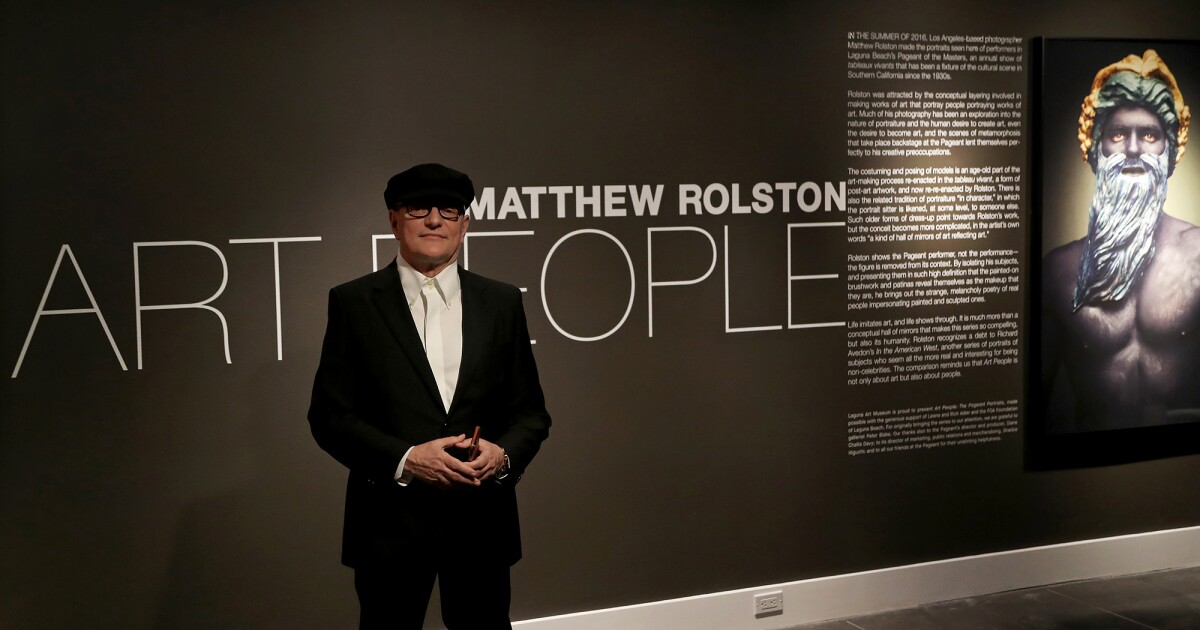 Through the decades, people have flocked to Laguna Beach to witness for themselves the alluring tableaux vivants of the Pageant of the Masters.

The living picture show, around since 1933, has captivated many, serving as an introduction to art for some, including one celebrated photographer who was so consumed by the show that he sought to incorporate it into his own work.

Matthew Rolston, a noted celebrity and fine art photographer who has worked with some of the biggest names in Hollywood, said he first went to the Pageant of the Masters when he was a mere 8 years old. He has now seen the show close to a dozen times.

A passion for art had been awakened within Rolston through family visits to the Pageant of the Masters and the Huntington Library as a child. In 2014, he returned to Laguna Beach to take in the show with friends.

He had been searching for a subject for a passion project as he hoped to produce images that represented why people are compelled to make art. In the living picture show, he found what he was looking for.

“Almost everything in the human experience is imagined,” Rolston said. “We have this amazing thing called imagination that we can then make real. We can imagine something and then realize it. That’s rather amazing.”

Rolston poured his efforts into gaining access to the volunteers in the Pageant of the Masters, and he got his chance in 2015 when he took on an assignment with the Wall Street Journal. He then received permission to follow through with his own project in 2016, and the culmination of that work is now on display in the Laguna Art Museum in a new exhibit called “Matthew Rolston, Art People: The Pageant Portraits.”

A capacity crowd packed into a showroom at the Laguna Art Museum on Saturday, June 26 for the public’s first opportunity to view the exhibit, a series of larger-than-life portraits of the volunteers who pose as classic works of art.

Julie Perlin Lee, the executive director of the museum, welcomed the audience to the reception event and introduced them to Rolston. Former museum director Dr. Malcolm Warner, who curated the exhibit, was also in attendance.

The portraits focus on the people in the tableaux vivant show who represent the art, and only them, removing the actors from the context of their performance.

Warner was intrigued by the humanity of Rolston’s photographs.

“Although I can recognize total mastery when I see it, I’m certainly no expert in the technicalities of photography,” Warner said. “But it seems to me that the power of Matthew’s work isn’t in the technique; it’s in the humanity, and anyone can relate to that.”

Peter Blake, a member of the Laguna Beach City Council who owns an art gallery in town focused on minimalism, said he was surprised to find himself fixated on the portraits days after he viewed Rolston’s work for the first time.

Blake added that the quality of fine art is dependent on the artist’s will and commitment to the intent of their work. He found that Rolston’s portraits were powerful for that reason.

“He is literally expressing himself, or she is expressing herself, in the only way they know how, and there is no other option.”

Rolston’s account corroborated those beliefs. Once he secured permission from Pageant of the Masters organizers to take portraits, he released himself from the expectations of idealized visions and was able to capture his subjects as he wished to represent them.

“I realized that the commercial work I have done over the years for magazines and advertising and such, I respect the work that went into that. It’s not entirely personal,” Rolston said. “There’s a lot of personality of mine, personal choice in that work, but I am there to serve someone else, the person who commissioned the work.

“With the fine art projects, I’m commissioning the work for myself. I have no one else to answer to or please, so I don’t have to be bound in that way. I have freedom.”

The Pageant of the Masters will be opening on Wednesday, July 7, so the timing of the exhibit could not be better.

“Laguna Art Museum and the Pageant of the Masters both trace their beginnings to the Laguna Beach Art Association, founded in 1918 by artists with a purpose ‘to advance the knowledge of and interest in art, and to create a spirit of cooperation and fellowship between the painter and the public.’” Lee said. “We are so proud to continue their spirit of cooperation and fellowship today, as Matthew Rolston’s photographs of the Pageant’s performers, now on view at the museum, connect our two organizations this summer.”

Rolston thought in producing the work that he would come full circle, returning to the birthplace of his love for art. What he ultimately considers the correct symbol, though, is one of infinity, given the Laguna Beach community’s everlasting energy for the arts.

“It’s a lovefest backstage, and I think the lovefest comes from the mission, which is very meaningful to me personally because the mission is to educate about art, especially for young people,” Rolston said of the Pageant of the Masters. “This is really family entertainment, so it’s mission worked on me.”

Support our coverage by becoming a digital subscriber.