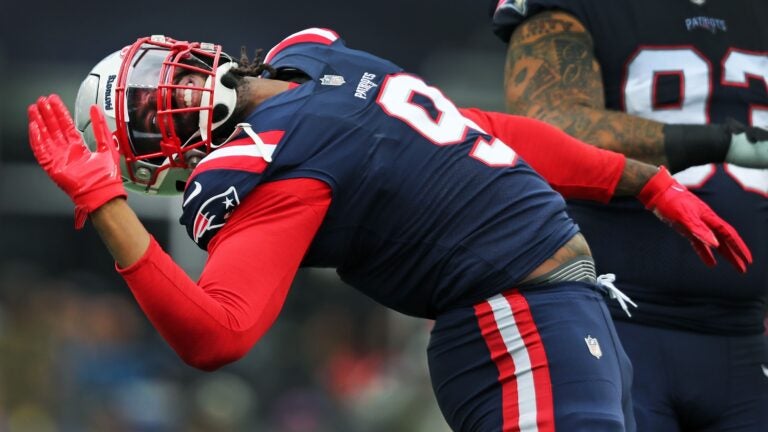 How is this Patriots season more than half over already? It feels like just, oh, a month ago they opened the season with a loss in Miami in which the offensive game plan seemed to be built around Mac Jones chucking up 50-50 balls.

Nine games in and, well, Matt Patricia’s offensive game plans are still a work in progress. When coach Bill Belichick acknowledged Tuesday that the last two opposing defenses called out some of the Patriots’ plays, it came as more of a relief than a shock.

Turns out the first step to improving an offense isn’t better blocking or savvier quarterback play, but not telegraphing your intentions to those trying to stop you. Who knew?

Yep, it’s been a weird 9/17ths of a season. Befitting their 5-4 record as they enter the bye week, there has been some good and some bad.

The good: Rhamondre Stevenson has emerged as a spectacular three-down running back. Matthew Judon is channeling peak Andre Tippett. The rookie class has been excellent, despite a couple of recent in-game benchings of first-round pick Cole Strange.

The bad: A variety of factors has led to Jones’s regression in his second season. Patricia has struggled to best utilize capable players such as Hunter Henry and occasional doghouse dweller Kendrick Bourne. And with 17 turnovers, second-most in the league, they’ve failed to properly protect the football.

All in all, it’s led to a season so far that has been moderately encouraging, but hardly exciting. That may change with matchups with the Vikings, Bengals, and a pair with the Bills still to come, but thus far this season has been about as fun as watching a Season 8 rerun of “The Office.” You know there will be some chuckles and some good times, but it’s not what it once was.

For the sport of it, here’s a ranking of the nine Patriots games based on entertainment value, from worst to best. Even with extra weight given to wins, these were surprisingly tough to rank …

Week 1: Dolphins 20, Patriots 7 — Quick, who scored the Patriots’ first touchdown of the season? If you said Ty Montgomery, well done, your memory has fewer clouds than mine. His 6-yard touchdown catch came in the third quarter with the Patriots already down, 17-0, in a game that portended some of their ongoing problems. The promising first possession of the season sputtered when Jones threw an interception in the end zone on an alley-oop to DeVante Parker, and the offensive line play was spotty at best, with Trent Brown and Strange missing an assignment that led to a Brandon Jones strip-sack and Melvin Ingram fumble recovery for a touchdown.

Week 9: Patriots 26, Colts 3 — There’s no need for a deep rehash here, right? We just watched this one a few days ago, and as impressive as Judon, Josh Uche, and the hellacious pass rush was in its nine-sack performance against the Colts’ not-ready-for-1 p.m.-Sunday-let-alone-prime-time quarterback Sam Ehlinger, the overall game was a slog, with Jones (147 passing yards) still searching for his first above-average performance of the season.

Week 7: Bears 33, Patriots 14 — This was entertaining, I suppose. Just in all the wrong ways. It was more of a spectacle than a football game. Belichick waited until game time to reveal his starter, went with Jones, then yanked him for Bailey Zappe after a terrible interception in the second quarter. The switcheroo appeased a Gillette Stadium crowd that chanted the backup’s name off and on early in the game, but it wasn’t the kindest way to welcome Jones back from his injury. Zappe had a few sparks of magic early, but the Bears — who came in averaging 15.5 points per game — scored the final 23 points, with their second-year quarterback, Justin Fields, weaving through the Patriots defense for 82 of the Bears’ 246 rushing yards.

Week 2: Patriots 17, Steelers 14 — I don’t recall this one — the rare Week 2 “must-win” of the Belichick era — being this close, probably because Mitchell Trubisky and the Steelers offense could muster only 243 total yards. But the Patriots didn’t secure the victory until a 5-yard run by Damien Harris on third and 3 with 1 minute, 38 seconds left. It’s fair to say this will go down as the best game Nelson Agholor will have in a Patriots uniform. He caught all six of his targets for 110 yards and a spectacular 44-yard touchdown reception just before halftime.

Week 3: Ravens 37, Patriots 26 — Nope, not the outcome you’re looking for, but it was an entertaining game, and there was hope for a while in the Patriots’ home opener. They trailed by just 14-13 at halftime before things got, oh, let’s call it chaotic. Lamar Jackson, probably the most electrifying player in the league, turned on the juice in the second half, finishing with four passing touchdowns, one rushing touchdown, and 325 total yards. The Patriots did tally 447 total yards, still their highest output of the season, but three of their final drives ended with Jones interceptions … and then he hurt his ankle late in the fourth quarter, throwing his season into – yep — chaos.

Week 8: Patriots 22, Jets 17 — The J-E-T-S suffered their 13th straight L-O-S-S to the Patriots, and for Jets fans whose spelling-bee repertoire is limited to one word, I’m spelling “loss” there. Glad to help. Truth be told, your talented young team is making Patriots fans a bit nervous, what with the rematch coming up in Week 11. Sure, this was a satisfying victory for the Patriots — all wins over the Jets are satisfying for Belichick in particular — but the path wasn’t exactly a thrill ride. Kicker Nick Folk saved some sputtered drives with five field goals, the Patriots took advantage of Zach Wilson’s here-you-take-it approach to quarterbacking, and a Jets penalty erased an 84-yard pick-6 by Michael Carter that would have changed the tenor of the game.

Week 4: Packers 27, Patriots 24 (OT) — Hey, remember when we thought the Packers were good? Despite blowing a 24-17 fourth-quarter lead and losing in overtime on a 31-yard Mason Crosby field goal, this one felt like a genuine moral victory at the time. With Jones out and Brian Hoyer sidelined with a concussion in the first quarter, rookie fourth-round pick Zappe came in and planted the seeds for a quarterback controversy, playing with poise while completing 10 of 15 passes for a modest 99 yards. There was great fun in the defense’s tormenting of Aaron Rodgers in the first half. The Patriots held him to four completions before the break, with rookie Jack Jones picking off a pass just before halftime and taking it 40 yards for a touchdown. The Packers have lost five straight since this game, however, so this moral victory has become something of a what-if.

Week 5: Patriots 29, Lions 0 — That the Patriots would win with ease looks obvious in retrospect. And I doubt many, if any, among us thought Lions coach Dan Campbell was ready for a duel of coaching wits with Belichick, given that tactically Belichick is playing chess while Campbell is playing … I don’t know, WWE 2K22 or something. But it’s worth a reminder that there was genuine suspense entering this game. The Lions came in averaging 35 points per game. Zappe was making his first start. And at 1-3, the Patriots could not afford to let this one slip. They certainly did not, with Lions quarterback Jared Goff looking as befuddled as he did as the Rams quarterback in Super Bowl LIII, and Stevenson breaking out with 161 rushing yards on 25 carries, both career bests.

Week 6: Patriots 38, Browns 15 — Why is this the most entertaining and satisfying Patriots game of the season so far? Let us count the ways. Even skeptics caught Zappe Fever after the rookie QB completed 24 of 34 passes for 309 yards — still a season high among Patriots quarterbacks — and two touchdowns to lead the Patriots to a second straight win. The defense picked off two passes and recovered a pair of fumbles while limiting the NFL’s leading rusher, Nick Chubb, to 56 yards on 12 carries. Emerging star Stevenson proved the most impressive running back on the field, running for a hard-fought 76 yards and a pair of touchdowns on 19 attempts. What else? Oh, and rookie receiver Tyquan Thornton scored a receiving touchdown and a rushing touchdown, the latter a 19-yard burst that all but clinched the win in the fourth quarter. All in all, it was quite a day. The best they have had this season.

Get breaking news and analysis delivered to your inbox during football season.

InEntertainment, games, Patriots, Ranking, Season
Previous post Another Round for “Don’t Get Around Much Anymore”