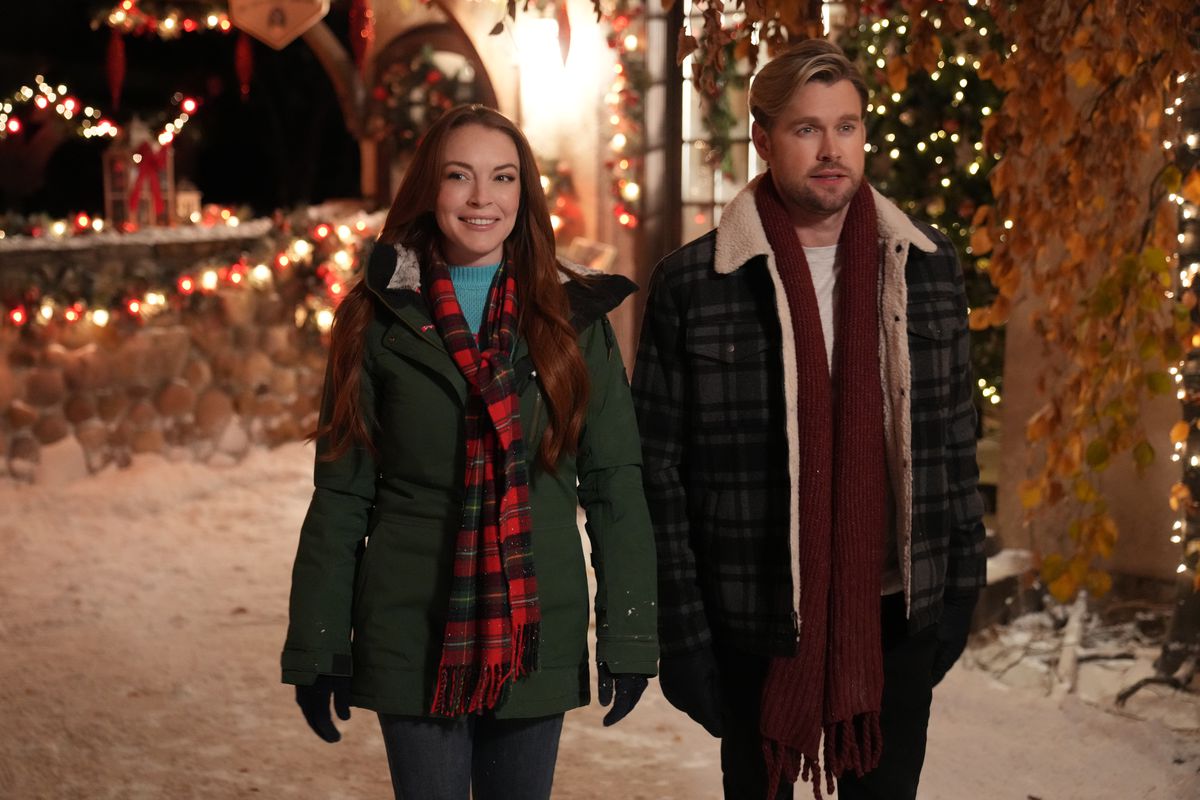 This weekend, the new Christmas rom-com Falling for Christmas starring Lindsay Lohan arrives on Netflix, alongside the action crime thriller Lost Bullet 2, the animated children’s film My Father’s Dragon from the studio behind Wolfwalkers, the new documentary Is That Black Enough for You?!, and much more.

Not feeling any of those? Well, how about a brutal horror movie about a killer clown, or a pitch-dark horror comedy about a janitor eating hallucinogenic worms, or a National Geographic documentary about an eccentric pair of French scientists who died in a volcanic eruption? Did you somehow miss Olivia Wilde’s new psychological thriller starring Florence Pugh and Harry Styles when it was released on VOD last week ? Well don’t worry, darling… It’s now streaming on HBO Max!

There’s lots to choose from in terms of what to watch and rent this weekend on streaming and VOD. Here are the top picks for this week’s new releases.

Lindsay Lohan stars in this new Christmas rom-com as Sierra Belmont, a spoiled hotel heiress who loses her memory after a skiing accident. Finding herself in the care of Jake (Chord Overstreet), a benevolent lodge owner, she adopts the name “Sarah” and gets a new lease on life helping out around the lodge in the days leading up to Christmas.

Where to watch: Available to rent for $7.99 on Amazon, Apple, and Vudu

The sequel to Damien Leone’s 2016 splatter slasher film features the return of Art the Killer Clown. After being resurrected by an unknown, sinister entity following the massacre in the previous film, Art once again embarks on a rampage to terrorize the hapless citizens of Miles County on Halloween night, this time targeting a teenage girl and her younger brother.

Leone’s sequel has generated an huge upswell of positive buzz since its limited release in theaters, even inspiring a fan-driven Oscar campaign. Just how scary is Terrifier 2? You’ll just have to watch it in order to find out!

Is That Black Enough for You?!

Based on the children’s book by Ruth Stiles Gannett, this new animated adventure film from five-time Academy Award-nominated studio Cartoon Saloon follows Elmer (Tremblay), a young boy who ventures out to a mythical island in search of a young dragon (Matarazzo) waiting to be rescued.

Where the Crawdads Sing

Where to watch: Available to stream on Netflix on Saturday, Nov. 12

Based on Delia Owens’ 2018 novel of the same name, this coming-of-age murder-mystery thriller stars Daisy Edgar-Jones (Under the Banner of Heaven) as Kya Clark, a woman who raised herself in the marshlands of the Deep South. After becoming romantically involved with two men from the neighboring town of Barkley Cove, Kya finds herself at the center of a murder trial when one of her boyfriends is found dead after an alleged assault. The film adaptation has garnered significant publicity as of late, owed almost entirely to the uncanny parallels between the original novel’s plot and an actual 1995 murder investigation involving Owens herself.

Antonio Banderas stars in this assassin action drama as Caleb, a former government “cleaner” in hiding who resurfaces with his protégé “Banshee” (King) after discovering a hit has been placed on his head.

Florence Pugh stars in Olivia Wilde’s follow-up to 2019’s Booksmart as Alice, the doting wife to a workaholic husband (Harry Styles) in a 1950s-styled company town secluded in an unknown desert. When Alice begins to question the true nature of her idyllic existence and the supposedly benevolent intentions of her husband, she sets out in search of answers that bring her face-to-face with a secret of immense, unspeakable horror. But don’t worry, darling, everything’s fine!

Pugh’s performance is enough of a recommendation to see this shiny, smoothly finished movie-that-feels-like-a-movie. The production design, costuming, and cinematography are ravishing, and wielded with precision. Musically, it’s even richer and a little edgier, pitting crooning doo-wop and civilized jazz against John Powell’s unsettling, nervy score. In the space between these luxurious images and discordant sounds, you can feel a door opening to a thornier, more provocative film. But Wilde, anxious to make sure everyone gets the point, has nailed it shut.

Where to watch: Available to stream on Disney Plus

This National Geographic documentary film follows the life, and final days, of Katia and Maurice Krafft, two French volcanologists who passed away in the 1991 eruption of Japan’s Mount Unzen. Composed of archival footage shot by the couple themselves, Dosa’s film attempts to chart the extraordinary story of the Kraffts and their all-consuming dedication to science.

After agreeing to spend a few days caring for an elderly woman (Foster) by a family friend, Elly (Grey) finds herself plagued by disturbing hallucinations. Learning more about her mysterious host and the house, Elly begins to suspect that she has in fact been lured here by a malevolent spirit who hides inside the old woman’s body.

All Jacked Up and Full of Worms

The trailer for director Alex Phillips’ new horror film certainly lives up to the movie’s title, featuring an assortment of odd and colorful characters who are either (a) all euphemistic forms of “jacked up” or (b) full of worms. The story centers on Roscoe (Botello), a maintenance man who, after eating from a stash of hallucinogenic worms and embarking on a self-destructive spree across Chicago, meets and falls in love with a moped enthusiast trying to transform an inanimate sex doll into a baby.

Yeah, so… Look, what else could I possibly say to pique your interest about this film aside from that last sentence alone? C’mon now.

Where to watch: Available to purchase for $19.99 on Amazon, Apple, and Vudu

Nina (Fumero) and Allen (Jones), a recently divorced couple who split everything after their breakup, refuse to give up “custody” over their favorite bar. With neither one willing to budge, Nina’s friend Chelsea (Bloom) steps in to orchestrate a series of challenges to decide which of the two will win the right to frequent the bar. Zany!

Two estranged childhood friends reunite one evening in Los Angeles on a whim and attempt to unpack why they began to drift apart from each other in the first place in hopes of rekindling their friendship.

Looking for another puzzle-box horror film à la 2022’s Hellraiser? Feasts your eyes on The Friendship Game, the new supernatural horror thriller starring Peyton List (Diary of a Wimpy Kid: Dog Days). After coming across a strange dodecahedron-like object in a yard sale, a teenage girl and her group of friends find themselves plagued by a series of inexplicable deaths when their close-knit bond begins to fray.

The biggest-budget movie in the history of Czech cinema, Medieval tells the story of the legendary military figure Jan Žižka (Ben Foster). A gritty and violent medieval military drama, this one is filled with court intrigue, military strategy, and gruesome fights.

Where to watch: Available to rent for $19.99 on Amazon, Apple, and Vudu

George Clooney and Julia Roberts star in this romantic comedy as a divorced couple who put aside their differences to work together with one goal in mind: stopping their lovestruck daughter Lily (Dever) from getting married and making the same “mistake” they did.

If you’re looking for a ’60s neo-noir mystery à la 2014’s Inherent Vice refracted through the Lynchian surreality of Brand New Cherry Flavor and psychotropic visual stylings of Panos Cosmatos’ Mandy, this film might just be your particular flavor of weird.

Written by Lord Huron frontman Ben Schneider and named after the band’s 2018 album, which in French translates to “Black Void,” the movie centers on Buck Vernon (Victor Mascitelli), a young man who travels to Los Angeles to track down his missing fiancée. While searching for her, Buck stumbles upon an underground drug ring responsible for an illicit new narcotic with the purported ability to suspend the boundaries of time and space and induce ego death. Jinkies! Also, there’s a ton of strobing neon lights and kaleidoscopic transitions, if you’re into that sort of aesthetic!

Not to be confused with a belated Scary Movie-like parody of Robert Eggers’ 2015 folk horror film, this sci-fi action horror movie is a sequel to a 2018 Korean film and follows a young girl with mysterious psychokinetic abilities who escapes from a hidden laboratory. When a criminal organization threatens both her freedom and the life of the man who rescued her, she’ll have to bring the fight to them in order to survive. 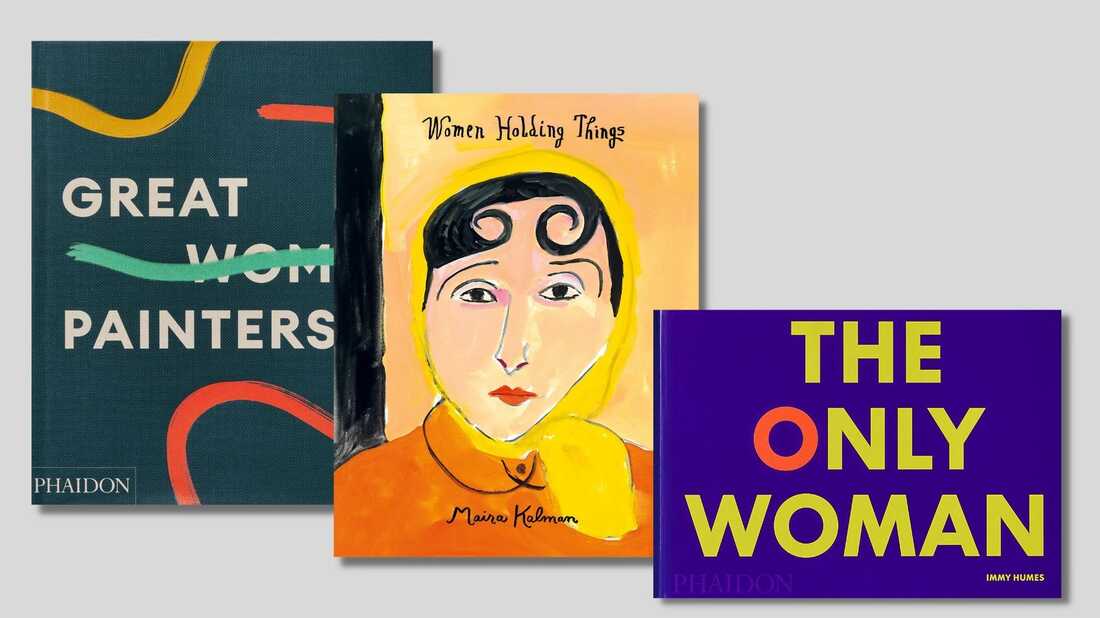 Next post a trio of art books showcasing women : NPR